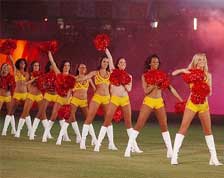 With the launch of Indian Premier League, by Board for Control of Cricket in India (BCCI), cricket-lovers got something more to look forward to. Promoted by BCCI and backed by ICC, the league found its model in the football and basketball leagues in the United States. Offering to provide lots of entertainment, with varied twists and turns thrown in, Tata IPL league won the hearts of audience in the very first season.

Apart from the different rules and unique composition of players, Tata Indian Premier League has one more aspect that makes it different from the routine cricket match and that is - cheerleaders. Coming from different countries of the world, ranging from Uzbekistan to the United States, these cheerleaders sure add the 'oomph' factor to the game. However, the reactions to the presence of cheerleaders are quite diverse.

On one hand, we have people who feel that the scantily-clad cheerleaders, cheering whenever their team players hit a boundary/sixer or get a wicket, make the game more entertaining. On the other, a section of society feels that these women, dressed to the bare minimum, degrade the spirit of the game and can also make the players lose their concentration. Whatever be the reaction, we can say only one thing, the IPL cheerleaders are here to stay!